The Edmund Fitzgerald: A blog on the final voyage 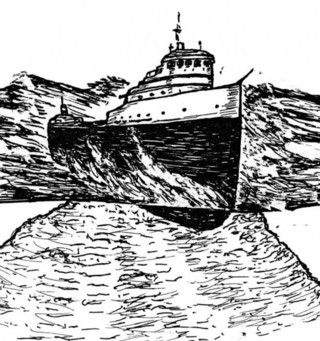 Just 17 miles from Whitefish Point and safety, the embattled Edmund Fitzgerald sank Nov. 10, 1975, so suddenly no one had time to cry out for help. What actually happened? This blog will examine the enduring maritime mystery.
Up north, the big lake is freshening with a sense of urgency that fall is approaching. Go out beyond the breakwaters and you know you have a force of nature beneath you. Careful, mariner! The countdown is beginning now for the annual observance of the last voyage of the Edmund Fitzgerald. I know something about that shipwreck since I have followed a part of its watery route in my 20-foot home-built sailboat, Persistence, and I have sailed along the Shipwreck Coast and stood in the bouncing cockpit of a modern cruising catamarin, looking at the spot just 17 miles away where the Fitz went down with all hands. She was just that close to Whitefish Point -- and safety. I have talked with mariners who were out on the lake the night that the Fitz went down, including the last two men to ever talk with Capt. McSorley, the skipper in his final moments. I have written on my findings in my books starting with In the Teeth of the Northeaster, followed that up with Call of the North Wind, and probably did my penultimate report in my nonfiction Broken Seas: true tales of extraordinary seafaring adventures. In my blogs here, I will do a series of focuses on the cause of the death of the big ore boat -- perhaps some that you have not heard before. Everybody onboard?
Be the first to comment
Be the first to comment

Persistence is towed behind the 1992 Suzuki Sidekick. Here Loris and I are on are way to Grand Portage, MN, along Superior's north shore.I'll be sailing Superior's northernmost arc, where I encountered the near fatal "storm of the century." This adventure became Wake of the Green Storm.
Bold Sea Stories