Along the Shipwreck Coast, life savers practice in the surf. 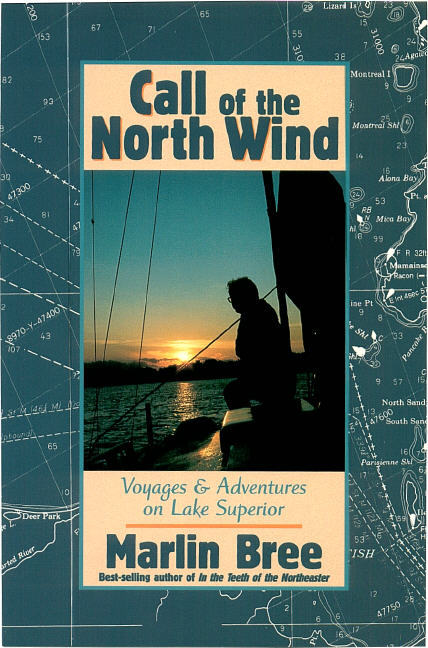 (Excerpt from Call of the North Wind)

Author's Note: Today it seems almost incredible that anyone would enter stormy lake Superior in an open wooden boat powred only by oars. Here's a story about Lake Superior's Life Saving Service when it made a rescue under extreme conditions:

Late in October, 1887, the Alva Bradley, an 189-foot wooden schooner, ran aground in gale-force winds and thick snow near Marquette, Michigan. Seas 20 feet high overran her deck and tore away her yawl boat; her railings, decks, rigging and lower masts were coated with ice. Pounded against rocks by heavy wves, she was in danger of breaking up.

The Portage Lake Life Saving Station, located near the entrance of the Portage Lake Ship Canal, heard the call for help late in the afternoon. But how could Captain Albert Ocha and his crew get their surfboat nearly 130 miles to the wreck site?

The rescue began as Captain Ocha and his crew of eight rowed their boat in the storm to Houton, Michigan. There, they lashed it on a flatcar behind a locomotive, which roared through the snow-covered countryside. When the train arrived at Marquette later that night, the Life savers unloaded their boat and equipment onto wagons and ran them to the surf's edge. It was about 1 a.m. when they climbed in, and, tethered it behind the tugboat, A.C. Adams, which gave them a tow into the blustering lake.

It was the worst storm of the season. In their open surfboat, on the open waters of Lake Superior, the Life Savers felt the full force of the gale. The spray that coated them, their boat, and their oars quickly turned to ice.

Undaunted, the Life Savers betgn to row to Marquette.

The Bradley's sailors, lying in the bottom of the surfboat and shivering uncontrollably from the icy water that had splashed on board, begged to return to the stricken schooner. The surfboat returned to the Bradley at about 4 a.m. to allow her crewmen to warm up. At dawn, because the old schooner was breaking up, the Bradley's crew and the Life Savers scrambled back on board the surfboat.

This time, Captain Ocha headed toward a bonfire he could see on the beach. It had been built as an all-night vigil by the townspeople. With great skill, he ran the dangerous breakers and put his surfboat safely on shore. The Bradley's crew members were carried to the fire, warmed and fed, and later taken through the woods to an awaiting train.

The Life Savers launched their boat back into the surf and rowed out ot the tugboat, which had returned at daylight. They took up the towline as the tug shouldered its way through the storm to Marquette.

When the gallant Life savers reached the docks, they found they could not get up because they were frozen to their seats. They had to be chopped from the ice-crusted boat by the townspeople, and, later, their frozen clothing had to be cut away to let them out.

Excerpts from
Call of the North Wind

From time to time, I pondered why I wanted to take my small sailboat out again on Superior. I certainly had my share of troubles in 1984, when I learned that a lightweight, small sailboat didn't have the power to stand up very effectively to Superior's storms.

I had felt humbled.

Yet here I was again, ready to try another sailing adventure. Why couldn't I be a normal tourist and just drive around the big lake? Millions of tourist did that. There certainly was enough lake to see -- days and days of driving to get around its immense shoreline.

Somehow, it wasn't quite the same for me.

The lake exudes a mystical quality. To really experience the lake, it seems to me, you have to be on it. A small sailboat gives you the right perspective. It is a wonderful way to explore a lake. You are close to the water. You appreciate the lake.

Click here to read free sample chapters at Amazon.com. The Boat Log & Record is the perfect way to get your boat and voyages organized.

One of the shipwreck tales that Call of the North Wind tells is that of the sloop of war, the U.S.S. Essex, who ranged the world's oceans in her prime but died a fiery death on Lake Superior. Her remains may be the last remnant of the work of the most famous clipper ship builder of all time, Donald McKay. The Essex (1874 - 1931) was one of his last vessels.

Lake Superior is not only the world's largest freshwater lake, but a fascinating and sometimes dangerous body of water. In his home-built sailboat, and, a catamaran, Marlin Bree retraces voyages of lost ships, early explorers, and heroic sea captains.

The sailing adventure begins in the beautiful Apostle Islands, off Bayfield, WI, and, then thrusts eastward from the Apostles along the Shipwreck Coast. Enroute, the author meets fog, high winds, and out of nowhere, a midnight storm that menaces his 35-foot catamaran.

He sails past sunken ships, pausing to reconstruct their amazing tales, including the most famous sunken ship on the Great Lakes, the Edmund Fitzgerald. He presents an Homage to Two Wrecks -- his story of the bones of two ancient ships that deserved better. One story is that of the ancient Navy sloop of war, signed into commission by Abraham Lincoln, that was burned for her copper. The U.S.S. Essex, built over a hundred years ago as an ocean going Naval ship that ranged the world, was one of the last vessels built by Donald McKay, the American master builder of clipper ships that set so many ocean-going records for speed. Today the bones of the Essex (still buried in the sand off Duluth-Superior harbor) are all that is believed to be left of McKay's fabulous ships, and, as such is an archeological treasure. Bree tells of diving on the wreck and how to find it.

The other wreck in Bree's "Homeage" is the sunken vessel the Pretoria, well over 300 feet in length and possibly the biggest wooden ship ever built. She came to a violent end in a killer gale, killing five orf her crew. She now rests in 52 feet of water.

Bree writes of the "Warriors of the Storm," the incredible life savers of the Shipwreck Coast, as well as the equally amazing "Black Robes" on Superior.

Excerpt from Call of the North Wind

There was a ghostly feel to the sky and the water. The horizon looked the same in every direction; the fog obscured everything that lay beyond the ship. The fog reflected back the light of the masthead and the bow running lights, giving off a spectral glow.

I was getting tired: the previous sleepless night was catching up with me. Staring into the fog did not help.

I shook my head as if to clear it, determined to concentrate on steering. It was easy to lose few degrees of course in these rolling seas as my mind drifted in and out of its own thoughts. I turned the wheel and watched the digital numbers march up on the compass and, seconds later, on the GPS. I had given up steering by the GPS display alone; in these swells, it was just too slow. Now I read the compass, and checked it with the GPS. I was holding the boat on course for the Keweenaw, now only hours away.

"We'll make it yet," I thought to myself. Down below, the crew were huddled over the main cabin table, playing cards.

Suddenly, there was a low, moaning sounds that came closer and closer. With a shriek, it descended; I could feel the sailboat caught in a great rushing of wind.

Tullamore Dew threw her bows to one side, then began a slide at an angle, her deck canting as if one bow was on an elevator. I spun the wheel hard to starboard, but there was no stopping her.

I had lost control.

With a gust-lurching crash, we plunged the port bow into a wave trough, then lifted off again, bursting out of the storm wave. I spun the wheel some more; suddenly, she lurched upward for a moment, then righted herself.

From below in the cabin came shouts. Someone threw open the hatch.

"It must have been a microburst from the approaching front," I yelled. "I couldn't hold her when that first gust came through. But she seems steady now."

I peered into the darkness; it wasn't the size of the waves that made my heart pound, it was the speed with which they roared. One bow would be hit by a wave train, causing a shudder, then the wave would pass underneath, dipping the bow, only to repeat the whole motion across the second bow.

We pounded along, up, down and sideways, as if on a watery elevator without a sense of direction.

The fog descended heavily about us, cutting our visibility in the storm. We were flying along, almost blind, headed for a big stone entrway somewhere ahead in the dark. I knew that the entry, with massive stone piers jutting out into Superior, had claimed its share of shipwrecks.

From the navigation station below came Thom's voice. "Well, we're here," he said. I could detect an uncurrent of worry.

"The GPS says we're just off the pier. It's right ahead of us."

But beyond the bows, I could see only fog and blackness. My stomach did a quick lurch.

What lay ahead? If we went in too close, we might end up on shore or smash up against a breakwater and go for a swim. Still, we couldn't stay here all right.