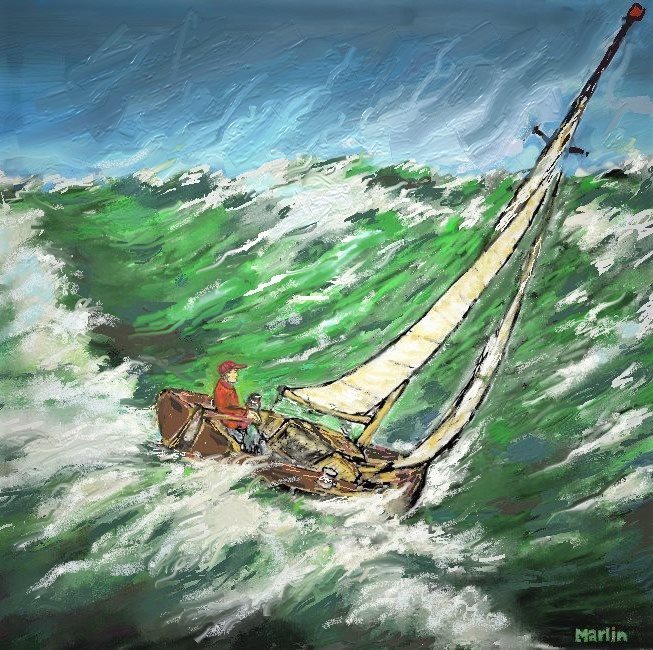 With incredible fury, the Green Storm catches a lone sailboat by surprise. The fight is on for survival.

in a small boat,

"Follow along with Marlin Bree as he cruises the Great Lakes' most remote shoreline, reliving its history, exploring its lore and pondering its mysteries. All this, a personal experience of Lake Superior legends by a man who, by chasing them, became a legend himself."
--Great Lakes Cruiser

Book is a must

"In addition to his own near-fatal cruise, Mr. Bree gives the most detailed account I've read of the dramatic sinking of the Grampa Woo and relates other tales of shipwrecks yet more distant in time like the rather amusing wreck of the expensive yacht Guinila near Rossport Harbor in 1911, and, the tragic sinking of the Daniel J. Morrell on Lake Huron in 1966 (The gripping story of the Morrell's sole survivor, Denis Hale, covered with ice and adrift for several cold November days in a small boat, will leave you with a new respect for the men and women who crew the big ore boats). And besides the wrecks, there's the story of the islands themselves: Silver Islet, for example, a tiny island artificially enlarged to ten times its original size that yielded a million ounces of silver between 1872 and 1874; and Talbot Island, nicknamed the Island of Doom for reasons you can read about yourself, because this book is a must for any Lake Lover's Library."
--Reader Weekly

Bree's account of the strength and ferocity of the storm and his struggle to keep his boat under control offers the reader a glimpse of the terrifying strength of the lake and its weather and the vulnerability of one man and his little boat. Bree vividly describes the beating that he and Persistence endured and his relief when he finds shelter in an island's cove is palpable. His historic recounts of boats and men that failed against the big lake's might are an added interest for the reader and further illustrate Superior's unforgiving nature. ---Northern Breezes Sailing Magazine

Click here to read free sample chapters at Amazon.com. The Boat Log & Record is the perfect way to get your boat and voyages organized.

A lone sailboat explores Lake Superior's North Shore and encounters shipwrecks, history, and the storm of the century.

An inspiring true story of seafaring on a last frontier. 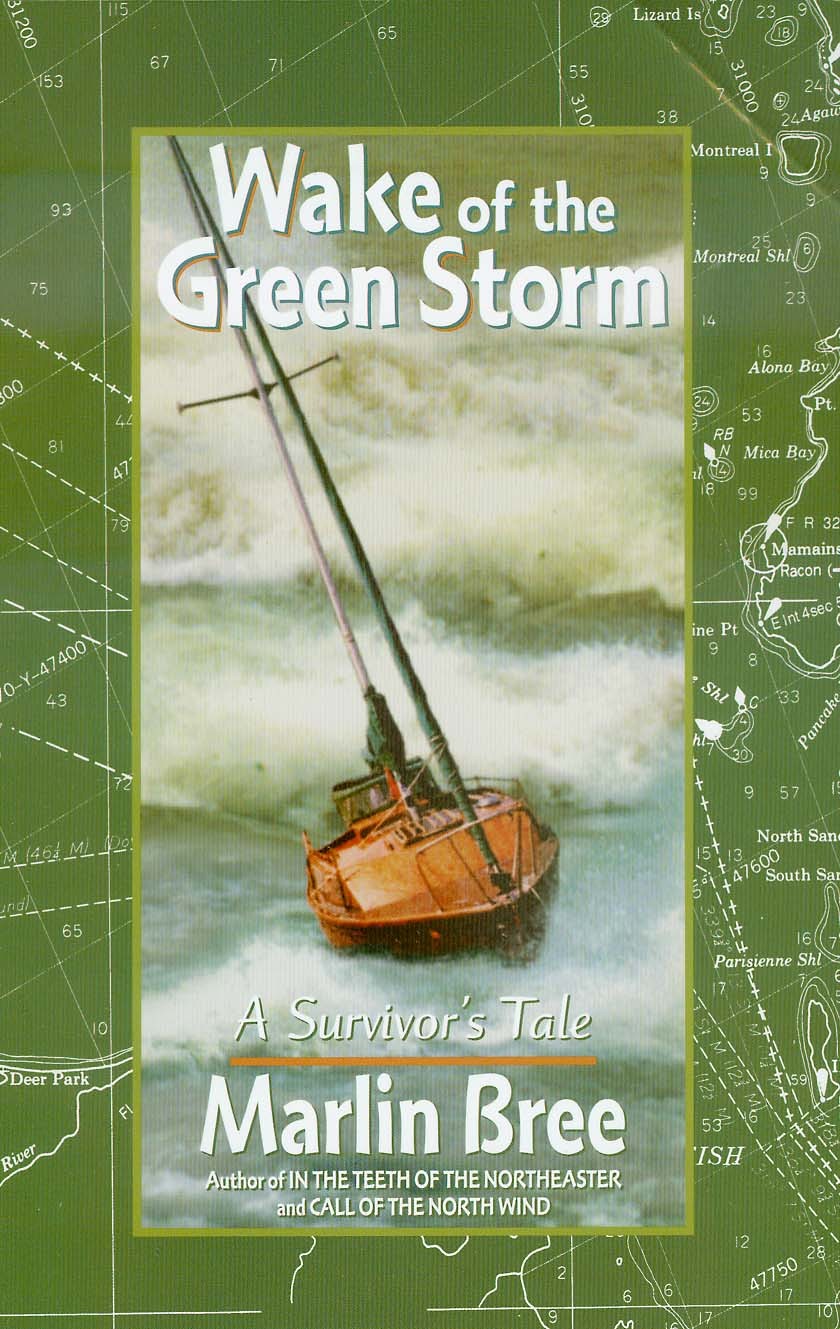 Read an exciting excerpt below, "The Day All Hell Broke Loose."

A battle of one man against the inland sea

Join Marlin Bree in the cockpit of his 20-foot home-built sailboat Persistence as he explores the reef-strewn island archipelago of the northernmost arc of Lake Superior. His remarkable voyage ranges geographically from the old fur fort in Grand Portage, Minn., across the U.S. and Canadian border, and into the northernmost arc of Superior, a wilderness island archipelago that would become the world's largest freshwater conservation area. Bree's voyage ends happily in the picturesque Slate Islands, off Ontario's rugged coast.  Along the way, he meets up with reefs, high waves, and fights a rare, progressive Derecho with downbursts estimated at 134 mph. Interspersed with the author's own adventures are tales of Indians, voyageurs, silver miners, sea captains and storms, ice, and underwater shipwrecks. There's even a night at an island of silver on the notorious waters of the world's largest freshwater lake. Told by an award-winning sea storyteller, Wake of the Green Storm is the inspiring true tale of seafaring in one of the last frontiers of wind and water.

Follow along with Marlin Bree as he cruises the Great Lakes' most remote shoreline reliving its history, exploring its lore, and pondering its mysteries. All this, a personal experience of Lake Superior legends by a man who, by chasing them, became a legend himself. --Great Lakes Cruiser magazine

...the only boater to date to report at length on what happened on Superior during the historic storm. This Bree does with unusually fine craftsmanship. --Ken Wisneski, Stillwater Gazette

Bree has a delightful voice and his adventures on Lake Superior offer SoCal boaters a rather different slant on sailing. Equals any oceanic adventure. --San Diego Log

Recommended for anyone planning a cruise in the area or just looking for a sailing read when confined to the harbor. -- Good Old BoatMagazine

A good Great Lakes tale, narrated by a sailor who obviously relishes the telling of a good story. --Soundings magazine

Read Marlin Bree's books. They are very fine and well-written cruising narratives. Also very good on the history of ports around the lake, especially in terms of maritime history. --Jerry Levy

(Excerpted from Wake of the Green Storm)

A cold mass of thick, gray fog hung ominously across the Sawtooth Mountains. But here in the small Fiord-like bay, the waters were clear blue down to their icy depths. Peeking out of the clouds was a burning yellow orb. The sun.

I was at the helm of my 20-foot sailboat, Persistence, with my 5 h.p. Nissan outboard running easily at about a third throttle, on the beginning of a solo adventure on Lake Superior. I planned to sail through what would someday be the world's largest freshwater conservation area, along Superior's Canadian north shore, an area of nearly 11,000 square kilometers stretching from Sleeping Giant Mountain to the surprising Slate Islands.

I felt reasonably confident. Early on, I had switched my VHF radio to NOAA weather, which assured me that today, July 4, 1999, would be the hottest day of the year so far, and that there would be the possibilities of thunderstorms, but only later in the day. So far, so good.

I had tapped my onboard barometer, noticing the needle rise just a twitch to indicate fair weather. A rising barometer. Double good.

Out on Grand Portage Bay, a small island was still wrapped in the cotton-candy gray stuff; to the north of the bay, where a historic 18th-century fort should be thrusting its spiked wooden stockades skyward, was a wreath of fog.

I had walked over a plank past a rusting barge and into the marina office. "Oh, the fog'll burn off," a local boater advised me. "I'd go."

So I had shoved off, my boat and I seemingly held aloft on the transparent, but glacial inland sea, ducking in and out of the spectral fog, running down my pre-set GPS waypoints. In the fluky, light air, I was running my outboard, with my sails uncovered, ready to hoist.

Entering the chill fog banks was like entering a tomb: cold, damp, chilling, despite my layers of wool socks, thermal underwear, and polar fleece. It was hard to remember that this was the 4th of July – and would soon be hot.

Though I expected an easy run across the Canadian border, to an island guarding the mouth of Thunder Bay, my boat was prepared for the open waters of Superior. I had closed all hatches and took pains to be certain my boat's weight was centered. I had taken my sleeping bag, duffle bags of gear, food, provisions, and anything else I could get out of the boat's ends, and lashed them alongside the centerboard trunk. I had carefully gone over the boat to be certain that there were no loose lines, and, that the rigging was taut. I had carefully buckled into my safety harness, and, laid out my GPS, chart, and a cruising guide to the area.

My VHF radio was tuned to Channel 16. Right now I was in the range of Grand Portage, and its marina, but as soon as I crossed the border, I'd be in range of the Canadian Coast Guard stationed at Thunder Bay, Ontario.

When I emerged from the fog bank, my heavy weather precautions seemed unnecessary. The sun was high and bright. Below me, clear waters sparkled down to glacier-carved blue depths, and, off to my port were beautiful little islands, lifting out of the waterline, green with small trees. I began to enjoy myself.

Soon I was across the U.S. / Canada border and I began to rue my layers of fleece and thermal gear. Perspiration lined my brow; my glasses began to wear a little haze of overheating.

Lifting my long-billed baseball cap, I brushed my brow with the back of my gloved hand and looked up at the shoreline's high crests. That layer of fog hadn't burned off. In fact, it looked denser, heavier – and slightly sinister.

My VHF radio was crackly, but its speaker blared an unmistakable klaxon. It was Thunder Bay's Coast Guard's storm warning.

I looked around: I was out on the open waters, an inhospitable shoreline to port, and a lot of reefs in between.

Ahead lay a small island, with a tiny cove – but that was twenty minutes away. An eternity.

I cranked up the engine to three-quarters power. Over the outboard's racket, I heard the dread words, "Mayday, Mayday!" Somewhere a sailboat had overturned. Three people were in the water.

I looked around. There was no place to run to, no place to hide, and no one to help me. I was alone.