What is it? Take a guess. Small innovations on Persistence make a difference on a boat. 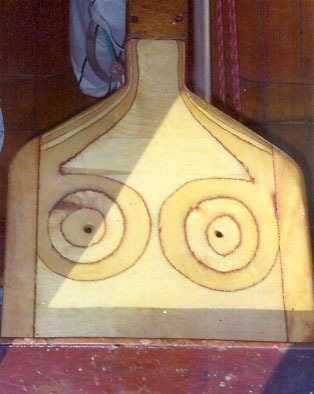 BOO! Give up? Actually, this odd-looking thing is the author's custom-built wooden seat, fitted in the companionway.The circles are for his, er, seat and are custom fitted. The holes let out water, if any comes aboard. 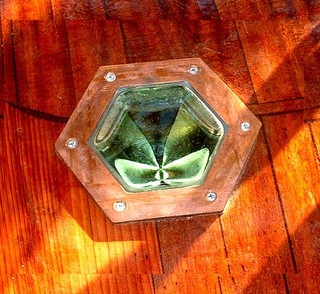 Whatzit? Passersby often wonder what this is. Actually, it's a deck prism inset in a cast bronze mount. It gathers light and disperses it below -- a favorite of the author's, particularly on dark days. 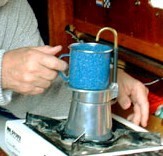 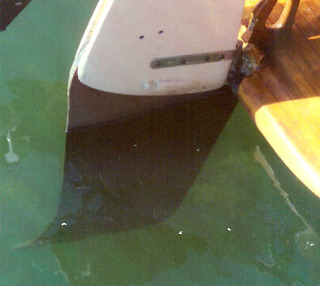 Look deep in the water: it's a sort of fin protruding aft. The author likes the fin and the bulb at the rudder tip to control heavy weather wave action. He uses the tip at a foothold to get back in the boat when he sometimes falls in. 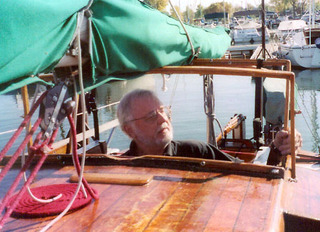 Home-built wooden bows fit atop the sea hood. When in upright position (shown here) they hold up a companionway dodger, just big enough for the author to sit on his wooden seat. When not in use, the Sunbrella and plastic hood comes off, and, the wooden bows fold forward. 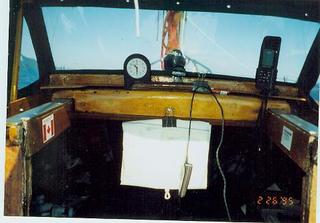 Inside the tiny cloth and plastic dodger (just big enough for the author's head and shoulders), the boat can be operated out of the weather. GPS is on right, compass dead ahead, and clock to port. A folded chart hangs from clip for easy reference, and, 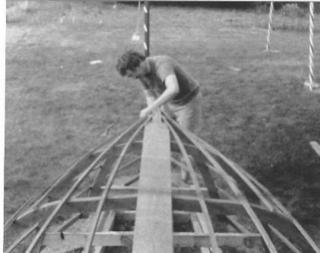 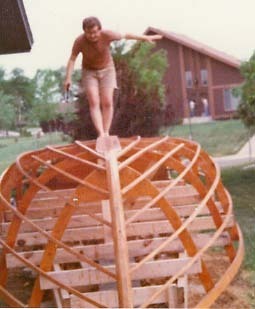 Most of the boatbuilding was done outdoors, beside the author's home in Shoreviw, MN. The stem and keelson are white oak, and, the stringers are Sitka Spruce. 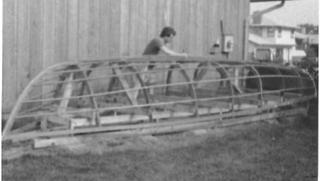 Length overall is 20 feet. Boat was built atop a strongback. 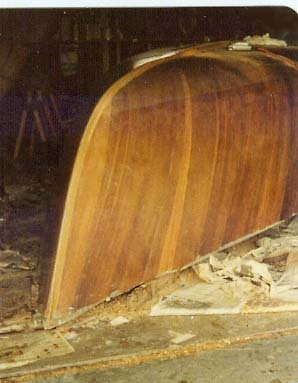 Glass cloth covers the veneers and becomes transparent under the epoxy. 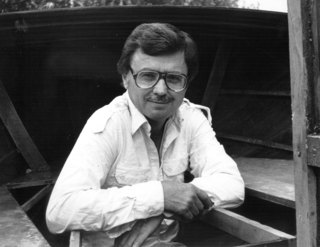 With hull complete, work starts on interior. Author is seated in forward V-Berth area. In front of him is the centerboard case. 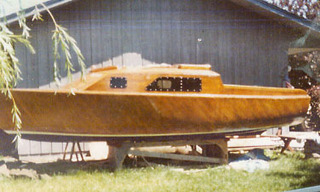 The hull and cabin are nearly completed. Boat is on its building stand. 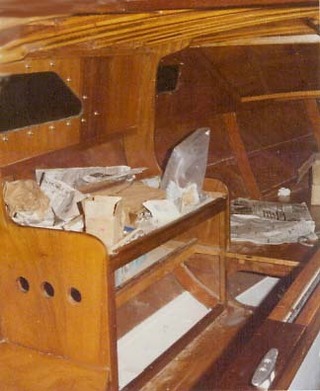 Early interior construction. CB trunk in foreground, and, the portside "nav" station, under the heavy lexan portlights, which are through bolted. Forward is the large V bunk. Note how the CB trunk is encircled with frames and carlins from the bilge to the mast step, making the little boat very strong.
Boating Books
Bold Sea Stories 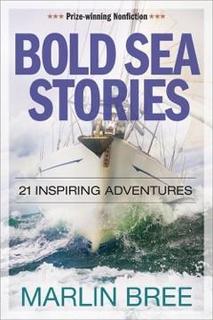 How Persistence survived "the storm of the century" winds at 123 mph. 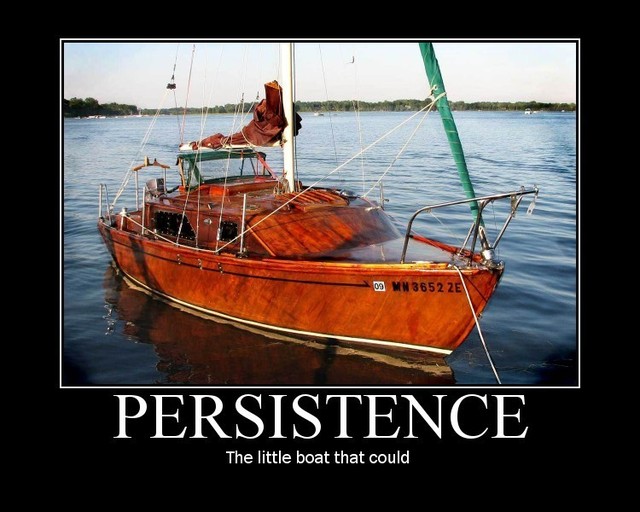 Persistence floats easily on a clear northern lake. The hand-built boat of wood veneers and epoxy took the author seven years to build beside his home in Shoreview, Minnesota and is this year 44 years old. It has had a remarkable career of wilderness cruising, solo adventuring, and surviving storms and reefs. It also has been a platform for the author to write his many cruising books (see My Books) 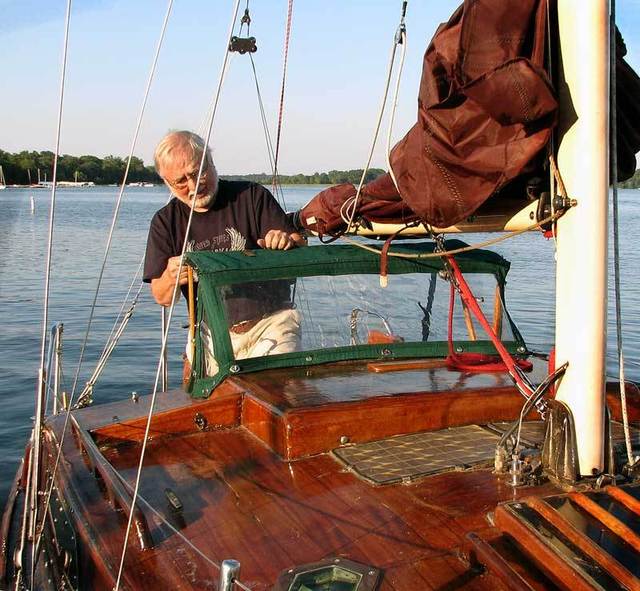 Marlin adjusts the folding hatch dodger onboard Persistence. He designed and constructed the dodger. Later additions included a new tanbark main and jib.

Though only 20 feet in length, Persistence is well outfitted. The author lived onboard for up to three months of cruising. (Click on image to enlarge) 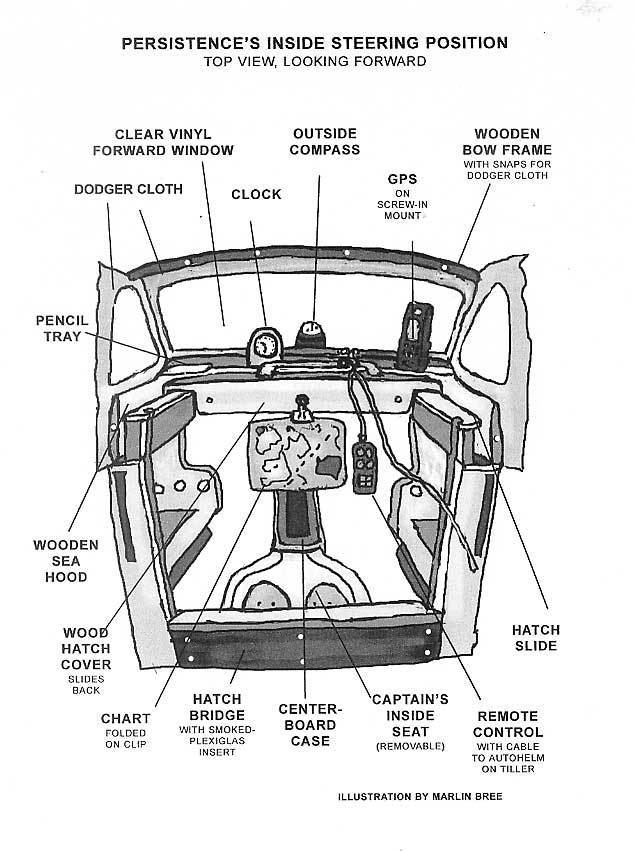 From this inside steering position, I can set Persistence up to self steer. Note GPS, chart, captain's seat and remote control for an autohelm, located aft on the tiller. The Artful Dodger covers all as needed, although the side panels can be demounted for ventilation on hot days and a back panel with clear plexiglass insert can be rolled down to completely enclose the solo sailor in heavy weather. 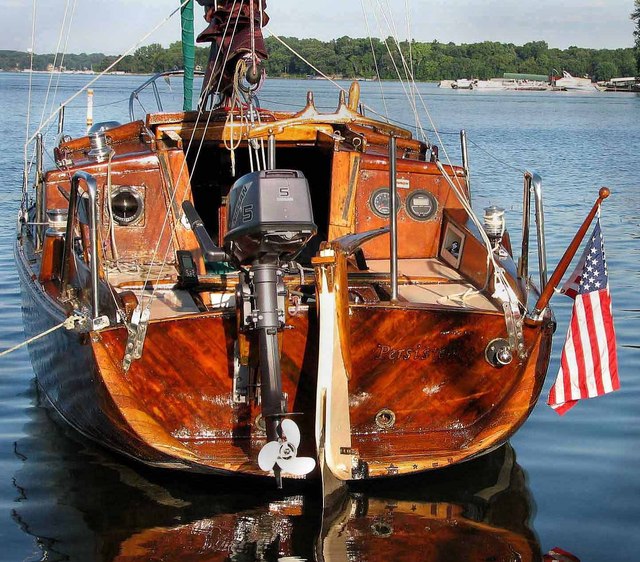 Persistence glistens under a repristinated finish. The boat is made of wood veneers, saturated with marine epoxy glue, and then finished with 8 coats of good marine varnish. This view from aft shows the instrumentation, the tiller, and the 5 horsepower two-cycle outboard engine.

Anatomy of a pocket cruiser

Engine: 5 hp. Nissan two-cycle outboard mounted on swing bracket. Remote 3 1/2 gallon tank fits under traveler in the cockpit. At cruising speed, the engine consumes about 1/3 gallon per hour. / Radios: VHF radio with masthead antenna, AM/FM radio with internal antenna, and, ham-band radio. / Berths: Large double berth located in the forecastle; two quarter berths are aft extending under sides of cockpit seat. / Miscellaneous Equipment: Magellan GPS, knot meter, depthsounder, three compasses, Portable head under forward V-berth. Foam Flotation fore and aft. The mast is set on a tabernacle and is foamed and sealed. The boat is lightning grounded from mast to keel, and also, all major metal parts. Autohelm with remote control. Three anchors: main Danforth with Chain in first 10 feet, smaller Danforth "lunch-hook," and 10-pound "mud" anchor of mushroom deisgn. / Design additions: Folding cloth dodger fits over the companionway, so the author can sit sheltered inside and operate the boat. A portable seat fits under the companionway. The transom was lengthened with "scoop". Six-inch deep stub keel added through which 3/8-inch thick steel centerboard slides up and down. CB is epoxy/graphite coated and swings on a 7/8-inch thick Silicon Bronze bolt running through case logs in the CB trunk.

"If she ever goes over, she's not coming back up. You'll have to be careful out there," was the advice I got from the boat's designer. But yet Persistence capsized many times, including mast tip in the water, and yet the small craft righted itself and survived to sail on with the author at the helm.

Persistence is not a keelboat -- one of those sailboats whose stability relies on a heavy lead keel far below the waterline that amounts to nearly 40% of the craft's weight. So how did the little sloop withstand the heavy pounding of the Green Storm and other bouts with Superior?

The answer, the author believes, lies in his careful building which selected the heaviest woods, such as layered inch-thick white oak for the keelson, and, the lightest woods, such as Sitka Spruce for the topsides deck beams. Overall, the craft is ultralightweight with its Western Red Cedar hull planking and cabin tops. Thus, I had some weight down below, though it was not a keel.

I also mounted two heavy-duty marine batteries directly atop the keelson, which added another 100 pounds or so. As an added precaution, I managed to change the righting arm by constructing the cabin to be within inches of the outer deck, so that when the boat went over, it would not "flop" into the water, such as it would do if the cabin were further back from the beams. I added inch-thick Sitka Spruce rub rails to each side, tapered at the front and the back to give the sheer a little more grace. These wooden rub rails acted as a sort of "life preserver" around the hull and not only protect the hull from damage from docks and other boats but add floatation in a big way when the boat gets knocked down.

Also, after having an experience with a sailboat that capsized and lay on its side as water gurgled into its mast and finally turtled, with mast full of water and pointing straight down, I decided to foam parts of Persistence's mast. I took off the crane, topped the uppermost section of the mast with spray-in foam, replaced the crane, and then methodically went down the mast and drilled a tiny hole wherever the mast had a piercing for a part, such as the spreaders, and sprayed in more foam, using the small plastic tube that comes with the spray in foam.

The result was that the oversized aluminum mast now had a significant amount of floatation in it, which came into play several times during the dangerous "Green Storm" encounter when the boat did flip over in high winds and the masthead did enter the water (and water sloshed up through the centerboard case, to my horror). What else helped us survive the storm of the century? Before I entered the open waters of the world's largest freshwater lake -- more of an ocean, really -- I always check the craft carefully for closed hatches and vents. I also move all gear out of the bow and the stern as much as possible, and secure with bungee chords these duffle bags, sleeping bags, toiletry cases, cartons of goods, tools, and supplies, alongside the centerboard case, which is in the center of the cabin. This keeps the weight out of the ends, especially the bow, which can dig into waves in heavy going, by making the ends lighter.

When the first blasts of the Green Storm arrived, I knew I had a well-prepared boat and immediately resorted to heavy weather sailing tactics by taking the initial wind blasts on the stern, rather than abeam. Trouble was, I then headed out into Superior far from shore and would have to ride out the storm until the first raw (and very heavy) blasts subsided and I could turn the boat (hopefully) back into the wind and back on course to Thompson Cove, a small island where a tiny harbor of refuge lay.

Part of our survival lay in the fact that I had taken sails down and secured them on the boom and on the jibfurler and was now running under 5 hp. two-stroke outboard engine. The engine took a terrible beating because part of the time its prop was out of the water, with no cooling water being pumped into the engine head---the boat lay on its side, capsized. Later on, when I returned to my home in Shoreview, MN, I took the engine in for servicing and checkup and told my mechanic that I was interested in getting a new four-cycle engine. "If you had a four-cycle out there," he announced, "you probably wouldn't have made it back." I still have my two-cycle outboard, for that was yet another important link in my survival during the Green Storm.

Leaning out, the author finds his mast crutch a handy convenience in the cockpit. Bree has lived aboard Persistence for as long as three months while cruising Lake Superior.